A perfect blend of sand, sea-sport and sun, Kalpeni is one of the 10 inhabited islands of the lovely and luring Lakshadweep. Also it happens to be a single coral atoll, it’s long and narrow in shape about 218 km from Kochi. Having a huge storm bank of corals because of the devastating storm that hit in 1847, it is said that as a result of this the shape of the island changed, once a portion of Kalpeni, Cheriyam is connected to it just by coral debris. It has been one of the most important islands of Lakshadweep as here the girls first began education. 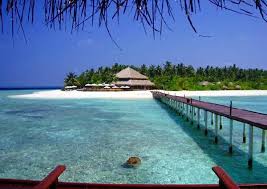 Although many would love to cherish nature’s marvels and unwind from the worries of life, but for the capacity to carry tourism, is immensely limited because of the fragile ecosystem of the island. Any kind of imbalance may cause threat to the environment.

Koomel beach at the northern most tip of the island with its calm and shallow waters and inviting coral reefs, makes it an ideal area for water sports. But only during summers and winters as monsoons are windy and risky as the sea is violent.

Located at a distance of 76 km south of Androth, it has a shallow lagoon and a rich coral reef. With a surrounding of 3 uninhabited islands around it the waters of the lagoon on Kalpeni glitters with the sunlight falling on it like a million dazzling aquamarine gems. Tourist can stay at the privately-held huts on the silver sandy beaches and enjoy reef walking, kayaking, snorkeling and pedal boats, or just basking away on the sands with the sun peeping between the clouds in the sky. The blue waters soothe you off to dream land and makes you forget your blues of life.

A light house originally made by Britishers for ship navigations, stands tall. One gets a bird’s eye view of the entire island from the top. It is cylindrical in shape and has black and white bands on it for distant visibility. The picture perfect deep blue sea with a lane of coconut plantations and the smaller island look beautiful from the 37 m tall tower. The denseness of the trees restrict your view of the ground.

One more significant landmark of the Island is the ancient Moinuddin Masjid constructed by Arab Saint and holy man Ubaidullah, the grandson of Siddique-ul-Akbar. The story says that once when he prayed at Madina and dreamt that Allah told him to spread the Islam religion in Jeddah and while he moved for his journey to Jheddha, he travelled by ship. On the way his ship wrecked and broke down, he swam on the plank and reached Amini and stayed there for a while, then he travelled to the other islands of Lakshadweep to preach Islam. He made the Juma Mosque at Kalpeni. This solitary and serene mosque is opened during prayers. The roof of the mosque is covered with Mangalore tiles and is given a typical Kerala-style architectural look. He succeeded in converting the entire population into the religion amongst all the islands. He stayed and died later in Andrott and his grave is at the Andrott Mosque is made into his shrine. A similar Masjid is made at all four Islands Andrott, Kavaratti Agatti and Kalpeni.

The popular Parichakkali and the Kokkali dances are the traditional dances of the island. They are usually organized by the tour package organizers in unison with the tourism department of Lakshadweep.

If you are looking to bring home some beach souvenirs, then you can shop at a handicraft store behind Koomel resort specially for wood work items, the popular ones are the model of the boat using coconut shrubs, on the eastern side of the island you may get the Souvenir T shirts form the hosiery shop called Fashionistas.

How to Reach Kalpeni Island

By Air
Air India and Kingfisher Airlines flying from Kochi airport, and takes you to Agatti the only airport in all the islands. From Agatti there are numerous ferry rides available that take you to Kalpeni. It is 218 km west from the port of Kochi and lies 201 km to Minicoy and 71 km south of Androth the island of Suheli Par atoll lies 139 km to the east of Kalpeni.

By Ship
Hire a boat from Mumbai to Kavaratti Islands and then to Kalpeni, you can also reach via Agatti Island.

It is a 5-day cruise amidst the beautiful islands of Kavaratti, Minicoy and Kalpeni. Shipped by MV Kavaratti, you may enjoy delicious cuisines on board with night stay and of course not to miss the interesting water sport activities.

You can also reach Kalpeni via the Speed Ferry Charter Service. It takes about 7 hours to reach from Kochi and you can visit many other islands in the archipelago like Kadmat, Bitra Kiltan Chetlal, Ameni, Kavaratti, Suheli, Agatti. The entry permits documentation will be taken care by the agency. Contact details 91- 484-2397550 / 2394640 / 4011136

M.V. Minicoy can take you to Kalpeni from Kochi. It is air-conditioned ship with a capacity of 50 people on board takes off from Kochi wellington island to Kalpeni Island; the approximate cost per person is 6000/- inclusive of food, documentation, sightseeing and sport packages.

Places to Stay in Kalpeni

The only option available for accommodation here is the Koomel Beach resort. You can go with the Tourism Coral Reef Package or the Coconut Groove Package both by Lakshadweep tourism and at affordable tariffs. Alcohol is prohibited here. The huts are fully furnished with bedrooms, bath and dining rooms. Enjoy lavish sea food here with a welcome drink of the fresh coconut.

Definitely not summers which is between March to May, which is the hottest, temperature ranges between 25 and 30 degrees and too much humidity. Climate is pretty identical to Kerala .The average rainfall is close to 1600 mm, in monsoons from May to September the island is drenched and the ocean violent at this time hence it’s not a good time to visit, most of the ship-based packages are closed in the season. Although once there the reef manages to balance out the sea menace and the peace of the lagoon. Best time to visit is the winters between November to March. It’s pleasant and breezy and temperature fluctuates between 12 to 20 degrees C during these months.