The island of Lakshadweep as it is known today goes back to several centuries ago and can be divided into two phases. The story of human inhabitation on these islands has a Hindu and a Muslim angle with both being very different. While the former denoted conquests, the latter was more missionary in approach and content. 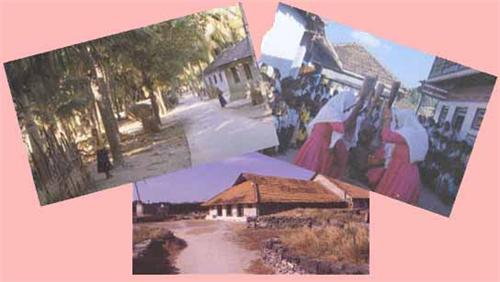 Then there is also the significance of the name. While earlier, this collection of Islands was called Laccadives it had been renamed as Lakshadweep or ‘A Hundred Thousand Islands’. Among the islands to be inhabited at the very initial stages were Bangaram, Amini, Kavaratti, Agatti, Kalpini, Kiltan, Andrott, Chetlat and Kadmat.

There are two very variant explanations for the inhabitation of these islands. Several of the local traditions have established that the last king of Kerala, Cheraman Perumal, converted to Islam and decided to visit Mecca on the persuasion of certain Arab merchants. Later, however, his absence was detected by his courtiers who sent out search parties to search for and bring back the king. Among the search party leaders was the Raja of Cannarnore whose boat was caught is a turbulent storm and was shipwrecked on one of the islands of Lakshadweep.

From here they travelled to a nearby island called Agatti and finally when they were headed on the way back they saw the other islands. Therefore, despite the overall Muslim population currently populating the islands, the hierarchical system of social stratification prevalent popularly among the Hindus of those times seems to have percolated down the generations to the current times and people.

Missionary of Islam in Lakshadweep

The second version is of the missionary approach to the islands. Belief has it that St Ubaidullah had fallen asleep while praying at Mecca and had the vision that Mohammad, the Prophet, had appeared before him and commanded him to take a ship from Jeddah to distant lands and work for the spread of Islam. St. Ubaidullah felt he had found his calling and set sail.

After months of wandering the high seas his ship was caught in the eye of a thunderous storm. He survived the shipwreck by staying afloat on a wooden plank and drifting to the island called Amini where he went to sleep and saw the Prophet, yet again, in his dreams. He was commanded to propagate Islam and despite stiff opposition from the islands’ headman, St Ubaidullah continued indefatigueable in his mission. Seeing his brave efforts one of the island girls fell in love with him. Converting her and naming her Hameedat Beebi, the missionary got married to her, further raising the ire of the village headman.

Legend has it that the headman and his cronies surrounding the couple, to kill them. St Ubaidullah appealed to the Prophet to save him from such adverse circumstances. Suddenly it came to pass that the entire group of enemies were struck blind. When the couple moved away to another island called Andrott their adversaries regained their sight. However, here also the position of opposition was much the same here as well. Yet perservence and a tremendous amount of patience, kept the couple going strong on their mission. Gradually, with the passage of time Islam spread on these islands. Even today the grave or maqbara of St Ubaidullah is considered a sacred pilgrim site in the region. In fact, any preacher going from these islands finds great respect in the hearts of Muslims in Sri Lanka, Burma, Bali, Malaysia etc because of his hailing from the Lakshadweep islands.

The finally spun coir made exclusively in these islands was greatly coveted by the trading ships crossing the area. The Portuguese fell to looting the coveted coir off these vessels much to the detriment of both the traders and the islanders. At one point they had forced themselves upon the inhabitants of Amini. The islanders had been ready for them. They poisoned the entire crew of the ship and not a single survivor remained. This was the manner in which they passively ended the aggressive onslaught of the Portuguese. This was also a major deterrent to subsequent invasions from that particular quarter.

During the region of the Hindu King Chirakkal Raja, these islands came under the administration of the Arakkal of Cannanore. All there events came to pass in the early seventeenth century. As the rule of the Arakkal was most oppressive and intolerable the islanders approached Tipu Sultan in 1783 for help. During that period Tipu Sultan was maintaining cordial relations with the Beebi of Arrakal. She agreed to hand over the islands but only five went to Tipu Sultan while the others remained under the Beebi’s jurisdiction.

Advent of the British in Lakshadweep

Around this time the situation was building up where the East India Company was consolidating its water ways as well as land occupation. It was in 1799 finally when these Lakshadweep islands came under the suzerainty of the British East India Company after the historical and yet dramatic and decisive battle of Sringapattom.

Under these regulations several restrictions were placed on the entry and settlement of various outsiders on the island. During the colonial rule itself nine schools had been established on the islands along with several dispensaries as a part of their welfare activities.

Finally Lakshadweep came under its current name and form in 1973 when this group of islands had already been declared to be a Union Territory in 1956.

Today the Union Territory of Lakshadweep is a much sought-after tourist destination and can be reached by air and by sea.