The culture of Lakshadweep Islands is very wide and varied. The ten inhabited island have a vast variety of diversified manifestations of the culture of the people inhabiting them. Just as there are diversities of religion. There are largely Muslims all over the islands but other religion and several varieties of cultural activities are also represented in smaller pockets of the population. There are Hindus and Christians as well. It is apparent, therefore, that the number and diversity of festivals ceremonies, rituals and ceremonies would also be a part and parcel of the cultural life of these Lakshadweep Islands. 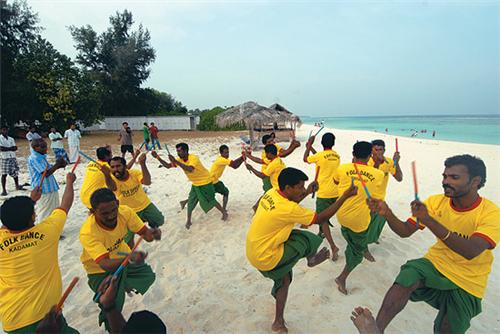 The people of the islands maintain their distinctive identities in their day-to-day activities. The entire population can be divided into four separate entities. Each of them is considered a separate community and is recognized as the Aminidivis, the Koyas, the Malmis and the Melacharis. It is believed by the islanders that among the first settlers on the island were the Aminidivis. Among these four communities, the Koyas are considered as the landowners and the Malmis comprise the community that works off the farms of the Koyas. Thus, either takes up the farming work on an annual contract basis or carrying some part of all the activities that go into tending the vast land holdings. It is the last community, the Melacharis who work as the lowest ring of the work force. They are the labour community of the islands and their primary occupation is collecting coconuts from the trees. They are skilled in this occupation and have conducted it for generations. Each of their communities has its own celebrations and ceremonies which are totally exclusive to them. However, there is one very positive aspect of this segregation of the form communities. They do not carry the segregation beyond work and take great pleasure in collectively observing all the festivities together. All of them participate whole-heartedly in each other’s festivities.

Another interesting feature of the culture of these islands is the dominating influence of Kerala which is the nearest mainland to this group of islands.

In fact, there is a very fine line of distinction visible in the performances of various dance forms as well as the musical concerts and classical art performance. There are a number of cultural manifestations among the island people. Some of the dance forms that came from Kerala were modified manifold and their transformed versions appear as classical dances called the Opana dance. Then there is the versatile Parichakali dance form. Besides, there are also the Lava and Kolkali dance forms. These are colorful and energetic performances done in groups.

Along with the cultural influence from Kerala the tribal dance forms accompanied by their traditional indigenous instruments give glimpse of the symphony of the mainland and the island cultures.

The main language and in fact the official language of the inhabitants of the Lakshadweep islands is Malayalam which is also the majority language of Kerala. Needless to say the influence of Kerala’s culture on the Lakshadweep islands is present in all the day-to-day activities as well as the special festival, dances and other cultural traditions of the island dwellers. The other languages that can be heard among the islanders are Urdu, Arabic, Persian, and Hindi.